Car accidents are very common in the United States as well as in other countries all over the world. They can be caused by a variety of factors and behaviors. We’d like to discuss a few of the most common reasons people become victims of car accidents.

Sometimes new drivers are so nervous about being on the road, they fail to obey traffic lights or signs. For some, they might not see them. For others, they might be distracted because of their cell phones or because they’re talking with their passengers. No matter what their reasons were for not obeying traffic signs or signals, failure to obey them can often result in an accident. People who go through stop signs or who try to beat a red light often cause the worst accidents.

Failure to Signal at a Turn or Lane Change

Have you ever been driving and the car in front of you suddenly makes a turn you weren’t expecting? Perhaps it didn’t really affect you, but it was a cause for alarm for someone else on the road. When a driver doesn’t signal before turning, it can cause serious problems for other drivers, and even result in accidents. Likewise, when a car changes lanes on a busy highway without signaling first, it can be even more dangerous.

Speed limits exist for a reason. All too often, people drive too fast and as a result, they cause an accident. When a driver is speeding, it can make it harder to stop quickly if necessary. Speeding and following too closely behind another car are two of the main causes behind rear end crashes. Drivers who speed aren’t always able to make adjustments based on weather conditions, which can be dangerous as well.

Driving Under the Influence

Finally, driving under the influence of drugs and/or alcohol is one of the main causes of car accidents in our country. The human mind simply is not capable of making responsible driving decisions when impaired, which is why so many people are severely injured or even killed by drunk drivers.

If you’ve been the victim of a car accident recently, you might recognize the other driver in one of the above scenarios. No matter what type of accident you’ve been in, or what the cause was, it’s important to talk with an attorney about your options. An experienced attorney has most likely dealt with all of the above situations, and he or she will be able to provide you with the valuable legal advice you really need. 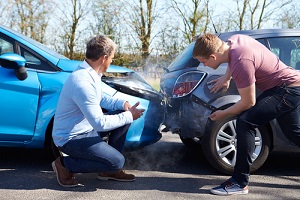 The 10 Most Bizarre Car Crash Stories

Your Car Accident: Who Pays the Bills?